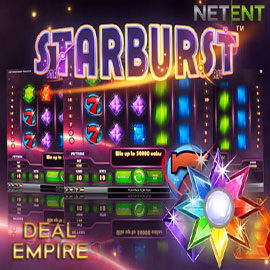 NetEnt
"The legendary slot that has dominated the industry for years! Starburst slot is a true casino classic. Slot games don’t come more iconic than this."
NetEnt
by

Starburst can be played at the following Online Casinos

Responsibly playing online slots can provide you good moments of entertainment and immerse yourself in a world of excitement and adrenaline. Starburst doesn’t need a long introduction, the slot has been in the iGaming industry since 2012 one of the most popular Jewel Netent slots.

This cosmic galactic themed slot the instant you start playing Starburst, the reels are set against a stunning, purple-hewed outer space background, with the earth’s cusp reflecting light with glowing stars moving across the reels in the sky.

The Starburst reels have a modest but wonderfully shaped symbol set. It is surrounded by a golden ringed planet, in keeping with the outer space theme. The Starburst symbol is an outer space slot rebranding of the iconic ‘7′ and ‘Bar’ symbols to a intergalactic online video slot.

The Starburst symbols are a variety of brightly coloured, multi-shaped, gleaming diamonds and majority of the symbols are stacked on the reels, making it common to get numerous winning combinations.

A winning symbol combination will occur if you get 3 to 5 of these symbols in a row on any of the paylines.

Purple gem- This is the game’s lowest paying symbol; five purple jewels on a payline will pay you 25 coins multiplying your bet per line by 25x.

Orange gem- If you combine 5 orange gems, you will receive a 40-coin bonus multiplying your bet per line by x40.

Green gem- if you get 5 of these green gems in a row, you’ll get 50 coins which means that it will multiply you stake per line by x50.

Yellow gem– The highest valued gem in this slot game, if you land 5 yellow gems in a row, it will pay you 60 coins, 60x of your stake per spin.

7 Sphere – The iconic fortunate 7 slot symbol has been given a planetary makeover and now offers the second-highest payouts in this slot game. If you land the 5 lucky number 7’s in a row, it will pay out 120 coins (x120).

Bar Sphere– The golden bar is the highest paid symbol, landing 5 Bar symbols in a row will pay you x250 (250 coins) for 5 on a payline. This may not appear to be an especially high number at first sight, but keep in mind that this symbol is identical of getting 5 symbols on a payline that pays both ways, thereby it will double your winnings.

The Starburst symbol expands in the whole reel itself, oftenly appearing on reel number 2, 3, and 4, and converting all reels into a Wild reel triggering a free spin feature. The maximum number of re-spins that Wild symbols can trigger are 3.

The minimal number of symbols not only makes it quick and easy to land the potential maximum winning when playing, but it also means that winning symbols appear frequently. There are also good chances to win because winnings are paid both left to right and right to left.

There is one additional remarkable symbol in this position that is unquestionably the show-stopper. The renowned multi-coloured Starburst wild symbol appears on the three central reels and completely replaces all other symbols. It’s a wild that expands and activates the wild re-spin feature.

Players can benefit from a valuable bonus features in Starburst and expanding wild features that can appear through reels 2 or 4. The Starburst Wilds Feature will be activated if you can land at least one of this symbol on the reels.

After then, the Starburst Wild spreads to cover the full reel, creating a wild reel. With a free re-spin, that crazy reel remains locked in place. If another Starburst Wild occurs, the sequence is repeated, giving you another wild reel and allowing you to re-spin. There are no Free Spins in Starburst, but it does contain the Starburst Wild symbol feature if symbols land on reels 2, 3 & 4 and converts all symbols.

Starburst Wilds feature is activated when one of them appears on any of the 3 rows. If the 3 middle reels get filled with the expanding Starburst Wilds a total of 3 re-spins gets awarded. When no additional Starburst Wilds occur during a re-spin, the bonus finishes. Filling the reels with 3 bar spheres (high-valued symbol) will result in payouts of 500 times your stake per line.

Starburst holds a unique approach in terms of features, because surprisingly it has no bonus rounds and interestedly gives one key in-game feature in the form Wild symbols. It’s remarkable that this slot game has become so popular despite the lack of standard free spins feature or a bonus round. The Wild symbol, on the other hand, assists to offer the game a distinctive boost along the way, and we’ll explain how it works below.

This stunningly colourful video slot is an eternal classic by NetEnt. Despite the fact that it has been featured in casino’s software since 2012, it is still one of the most popular slots in the industry. Low volatility games, such as Starburst, fall under this group. This indicates that because the slot has a modest hit frequency of 22.65%, players may anticipate to win frequently. A maximum victory of 50,000 coins is possible in this game.

Previous
Next
Starburst can be played at the following Online Casinos

We care about the Players we send to these online casinos. Gambling can be addictive, please Play Responsibly. Therefore never spend more than what you can afford. The bonuses promoted and reviewed on this site are designed to increase your entertainment and fun.
©2022 Deal⚔️Empire.com. All Rights Reserved